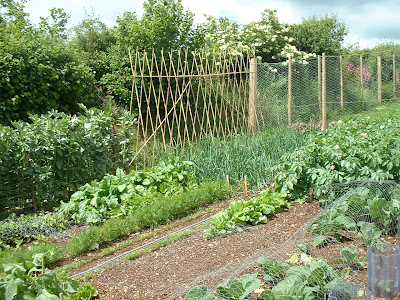 The veg garden is growing well. We have been harvesting radishes, lettuce and turnips for quite a few weeks now. In the next few days the first of the potatoes will be ready, shortly followed by the first picking of broad beans and carrots (possibly next weekend). We have however also started to experience our first losses, the first to go was the late rhubarb - well to be honest it never really got going ! Then with the high winds over the last week several of the broad beans were broken down. They are sheltered from the winds by the hedge but unusually these were easterly winds.One of the first earlies had been eaten just below ground level, so we lost that plant.We did however manage to retrieve half a dozen small potatoes.Three sprout plants have been attacked, most likely by cabbage root fly, due to us being too late putting the collars around and several parsnips failed to appear or disappeared shortly after sprouting, due most probably to the mole and the cats. We have sown a second row - a little late.
The greenhouse - touchwood - is also doing OK so far. The first of the tomatoes are forming, Shirley. 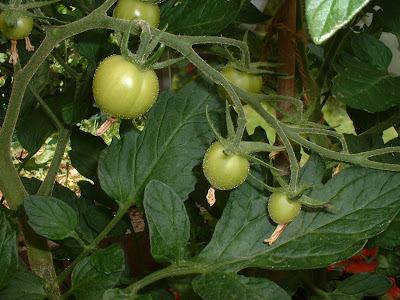 The peppers are looking sturdy. 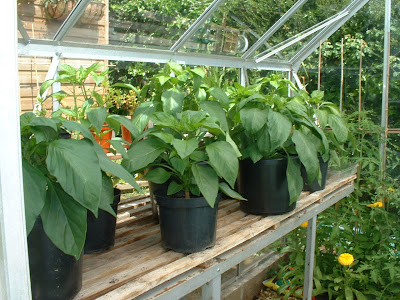 We have been harvesting radishes, spring onions, salad leaves, parsley and rocket.

Photo: Left hand side of greenhouse - peppers above: melons below: Ildi tomatoes at the end. 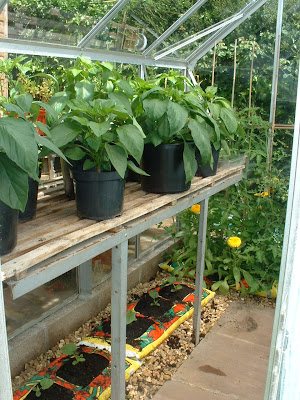 Photo: Right hand side of greenhouse - Big boy tomatoes nearest the door: Shirley tomatoes further in and at the back: A few spring onions on the floor in container. 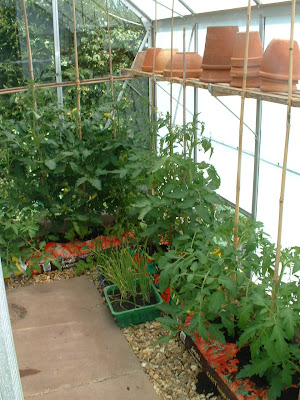 everything looks a lot tidier than our place! - and you have broadbeans.. ours are a miserable failure...

We only have the one patch not ..how many is you have ?...and it's my first year with a greenhouse so still a novelty !

The broad beans are doing well despite the battering they took last week.