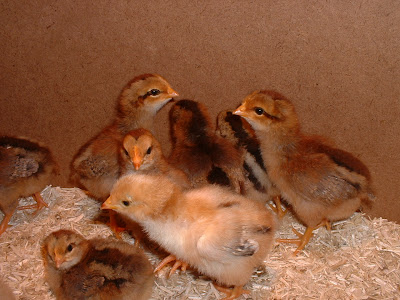 The chicks are growing at an amazing rate of knots. Their wing feathers are developing and their true feather colouring is beginning to show on them. They are also growing fluffy tail feathers. They are spending a lot less time sleeping and more time scratching around and wing flapping.They are fascinating to watch and I spend far too much time doing so. They react differently to different noises - a sudden loud noise and they immediately drop to the ground, wherever they are. If a car passes they stand tall and alert, looking around. If they are unsure of a sound they huddle together under the lamp.

Today I replaced their feeder and drinker with new ones. Initially they were very suspicious and huddled together. Slowly one by one they crept closer until all were cheeping in excitement over their new 'find'.

I think we have an impostor amongst them. The last chick to hatch on Tuesday is different, only slightly. I think he may be a Welsummer cross, looking at his stand possibly a Brahma.I do hope so !! He has slightly feathered feet and stands tall and straight with very strong legs. 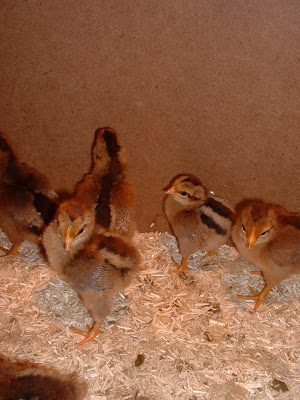 ( unfortunately he is a little wary of the camera so I have been unable to get a good photo of him yet.)

Freddie... the bottle lamb is doing great.We are all becoming far too attached to him. He has grown so much and is very playful. He skips and bounces around the hen run and his favourite game is to creep up behind the hens and startled them, but as they squawk and flap he jumps more than they do. We are trying to reduce his number of feeds and increase the amount, so he can soon join the others. At present he is still on four feeds a day but is taking a greater volume each time and he is going longer between feeds. Still has the 11.30 pm and 6.00 am feeds though !! It will be nice when they become a little earlier and later respectively.


He is hard to photograph as he comes so close to the camera it is difficult to take any descent shots. 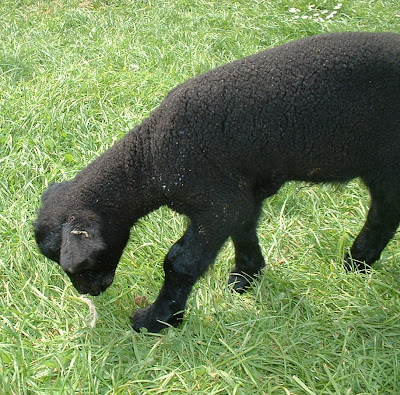 my welsummer crosses also had that eyeliner look :)