Poor Sylvia ! when I lifted her this morning an egg had exploded under her, she stank and was obviously uncomfortable as she spent almost the entire 20 minutes of her freedom time dust bathing. Once clean she had a quick bite to eat and a long drink, she was then eager to go back onto her eggs.

I feel somewhat guilty, on two counts. Yesterday I thought there was a whiff of rotting eggs and if I had removed the suspected egg it wouldn't have happened. I'm not sure there isn't another, but once you have the delightful aroma of bad egg about you everything smells. Whilst she was cleaning herself I attempted to clean the nest and remaining eggs, with as little disturbance as possible. I shook some barrier red mite powder around the outside of the nest, hoping the scent might deter any flies. I also took the opportunity to candle the other eggs ( not something I normally do with a broody ). If it had been obvious that all were clear I was going to break her broodiness, as it seems unfair to sit her in this heat with no successful outcome. However at least one is viable, a white egg of unknown origin. It was harder to tell with the other eggs as their shells were darker and the shed was too light. I think there are at least three clears/ non goers.

Secondly I feel guilty that we haven't done right by her. She is a brilliant broody, sitting tight and getting off only once a day and that is under protest, despite the terrific day time temperatures we have been having. The least we should have done was to have given her a decent clutch of eggs, we knew some of these were suspect. A lesson learnt !

Next year we will hopefully have our own fertile eggs. Of the Light Sussex chicks, now 6 weeks old, it appears I have a trio and am very tempted to keep them as the starter group. The trouble is I also have a very nice looking pair of Speckled Sussex, now 11 weeks. Of the Welsummer chicks I am hoping to keep two layers, the rest I'll try to sell, if they don't they should make a decent if not huge meal.

Photo: Light Sussex chicks 6 weeks old. The one squashed at the back is of unknown breed. 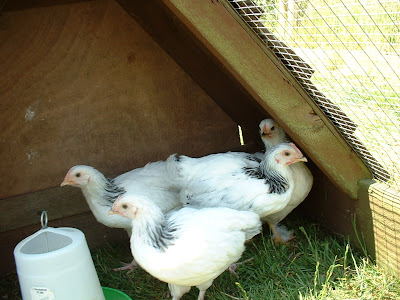 Photo: Speckled Sussex, hopefully a pair ! and two of the Welsummer hens 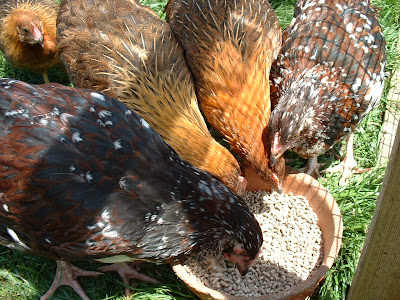 I learnt recently from my neighbour that you can put bought day old chicks under a broody. She let a broody sit on a couple of eggs for three weeks then got 15 day olds from the market and I had the fun job of being pecked whilst I popped them underneath her. A day later she was as proud as punch with her new brood. Good job hens can't count though - 2 eggs - 15 chicks!!

: ) Luckily this hen is very gentle.

I knew a broody would often accept day olds but sourcing any around here seems harder than finding good hatching eggs.

It can't be too long now before you muscovy hatches ? How are your turkey poults doing ?

Pity you are not over here - virtually every market has chickens from day olds up to point of lay.

The ducklings are due on 21st July. After I initially thought she was sitting she decided to lay a few more eggs and eventually stopped at 16 (although 2 got broken). The turkeys are growing so fast but sulking slightly as I am in the process of moving them off turkey pellets and onto a mix of cracked maize, crushed barley and wheat. They want pellets!! I'll try and post up a photo but we are having computer/camera problems.

How is Fred - is he still scouring? Lamb Chops will be off the bottle in a couple of days as I will have run out of milk powder. Now - where are my ear-plugs?

Fred has finally dried up - a couple of days after worming , so most likely that was the cause. Poor thing is skin and bones though! There is no way now the two lambs can go at the same time.

Good luck with the weaning !

oh - that smell is soooo bad. we had exploding egg under hen once too. I dont suppose candling will help as the clear eggs are unlikely to pop - its the ones that have stopped along the way that go bad.

we have a broody, sitting on plastic eggs.. and eggs in the incubator. hope to have chicks to put under the broody....

Think I've just about 'lost' the smell on both me and the hen. The idea of candling was to take her off the nest if all the eggs were clear.

Good luck with your eggs and hen, are these the cream legbars? The chicks are sex linked aren't they? I know it doesn't make too much difference to you but nice to know what you have without the endless guessing.

we have CLBs, Australorps, exchequeur leghorns and 6 of our own cuckoo maran crosses. hopefully we should get something,

Fantastic ! did you buy them locally? How many of each do you have?

We still only have the one broody ! I think my hens need a talking to from yours !