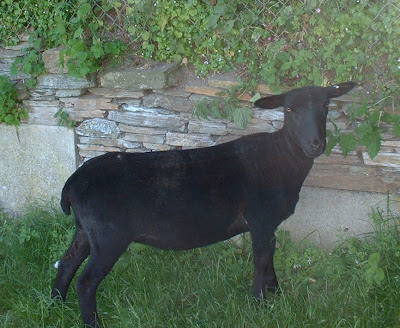 The new ewe has finally been named. All sheep from where we bought her are named with F as the first letter.

We tried out several names but kept coming back to Freda (after all we have a Fred ) It was finally clinched when the shearer with no knowledge of any of the names of the ewes, caught the new ewe and said ''come along now Freda''

Bonjour Freda and what a sensible name you have - our sheep are called Rammy, White Face, Black Face, Droopy Drawers, Lamb Chops, M1 and Reject!!

PS - good job I read this post back before pressing publish - I had swapped a S for the W on White Face :-0

It is only the ewes that have names as hopefully they are long term.

The pigs so far have no names. They are indentified as 'the blonde on' 'the little one' 'the big gilt' and 'the other one'