Today all four of the older hens laid...the first time since I have had them !

So far the pullet hasn't laid today but it was late in the afternoon yesterday before we had an egg from her and it was quite strange, so I would be surprised if she did lay today.The egg was in fact two laid side by side. I'm sure they were joined, as one was soft shelled and the indentation fitted exactly into a slight raised area on the hard shelled egg. As I picked them up they came apart. However my husband is convinced she couldn't have possibly laid two width wise and that they must have rolled together ...I don't know. 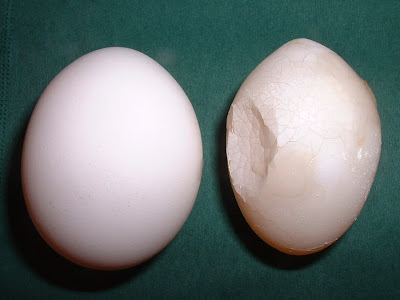 It's not unusual to get 'odd' eggs when a pullet first comes into lay but I haven't seen this before.

On the subject of eggs...today I tried candling the Welsummer eggs, their dark shell made it more difficult to make a decision on their progress but one was obviously clear so I removed it along with the clear one from the Speckled Sussex.We are now down to 11 of each, not bad so far.