Today we woke to yet another white, frosty morning. It has been several years since we have had so many successive frosts at this time of year. However it wasn't long before it turned into another glorious day.

Today I have been slightly more productive than the past couple of days, but have come to an early stop.

The poultry shed has been tidied in readiness for the chicks, although I am beginning to have a sinking feeling that there won't be that many.My husband has made a brooder from a circular piece of hard board and wing nuts so the size can be adjusted.The plan was to use the cage in the shed but the electrics have yet to be fixed, so the brooder is for the garage just in case the shed isn't ready.

Photo: Poultry shed. The cage under the shelf is the brooder it has a removable floor and the doors and front plinth come away for easy cleaning.
The wide shelf above the brooder is for the incubator (next time) 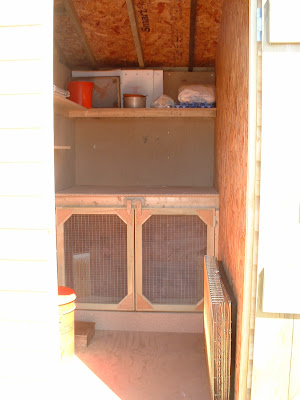 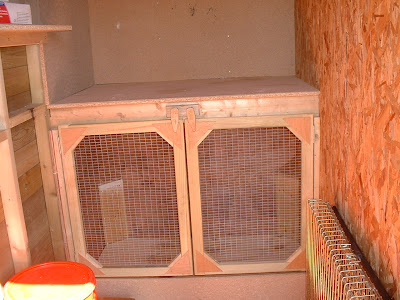 I spent the rest of the day moving pots and plants. The back garden is pretty much finished now. Hard work wise at least. It all looks very new and lacks character and personality (the garden could belong to anyone) but that will change over time. So we are now starting to sort out the front. Since moving here many plants I wanted to keep have been potted up and moved from pillar to post, as different parts of the garden were being 'done'. Today I moved them again, hopefully for the last time before they are planted where they will stay.

My husband has continued to build the stone retaining wall. We have also strung the broad beans. The post are far sturdier than necessary, but the sycamore 'thinnings' we used had grown much more than we realised ! We also hooked the grass on the hedge bank to encourage it to thicken.

Other than that the usual chores. A much easier day than we had planned.... but getting there.