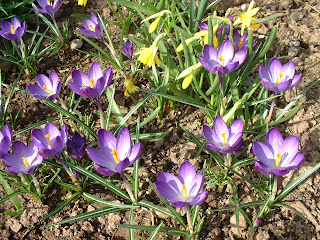 The weekend has been beautiful and we have managed to get a fair amount of work done, although not as much as we hoped /planned to do. ( Never do ! )

Saturday: We worked hard all day and by the evening all I was fit for was a quick, easy tea, bath and an early night.
The weekend always starts with the usual clean out /tidy up of all the animals.After that it was a day of cutting back and pruning. We started with my mother in law's garden, she died just before Christmas and there is much sorting out to do both to the house and garden. We cut the hedge bordering the pavement, it is quite neglected and could really do with a hard prune, but we just trimmed, removed the dead wood and as much ivy as possible without creating too many holes.We then tackled the brambles along the church side and cut down an old Laxton apple tree and sorted the wood into logs and sticks for next year. I never like cutting down trees, but it was diseased and in an awkward place. 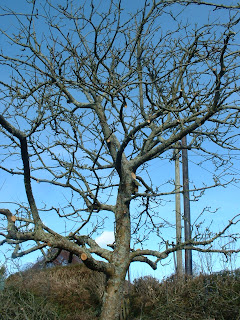 Next we finished pruning the old Bramley.We probably won't get much fruit from it this year but it does look so much better for it.

At home we (husband) added more compost to the veg. patch and worked it in.

Sunday: Today has been a little easier going. First the animals sorted and then we took the bags of brambles and clippings to the tip. More raking of the garden, more compost. I topped the grass in the hen's run and moved the houses and runs around. Planted more seeds...Marshall's - Greenhouse Tomato - Shirley and Marshall's Sweet Pepper - Carnival Mix. 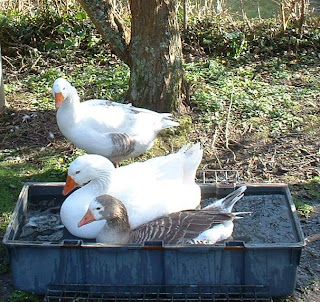 My husband made an emergency pond for the Orchard geese ( long story involving the electricity board and resulting in one damaged paddling pool) out of a cut down cold water tank. It works a treat.

Then yet more compost!! Digging out the good and bucketing up for bringing home, turning and mixing the rest and returning it to the bins ( old pallets tied together.) and the usual cutting, bagging up of wood for the woodburner.

and all in the sunshine too !!