At last the mornings appear to be getting lighter. The evenings have been notably lighter for a good few weeks now, in fact since I first began this blog back in January the hens have extended their bedtime by a good hour. However the mornings have remained dark, admittedly the appalling weather hasn't helped but this morning it was light by 6.30 am. It was a lovely morning very frosty again ( but no frozen taps), the moon was low and huge and the colours of the sky on the horizon were fantastic, I just wished I had remembered my camera.Unfortunately the rest of the day didn't live up to it's promising start, grey, cold and dull.

Kiwi, the borrowed lamb, is settling in well. She is gradually leaving Annie's side to venture a little on her own. Now whether this is increased confidence or the fact that she has received a few head butts from Annie I don't know. She is quite a spirited little thing and stands her ground when approached by the geese and also manages to get her fair share of the food when Annie is fed.

Both of the orchard geese are now laying and I don't think it will be long before the paddock goose starts, her keel is so close to the ground now it is almost touching. Also when she is let out first thing she heads straight for the hedge bank to find shell and grit, even though I do provide her with both. It is something she has done every season and a definite sign of her coming into lay. Maybe this year she'll 'do it by the book' and lay on Valentines Day. 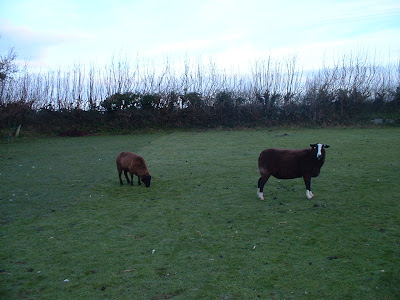