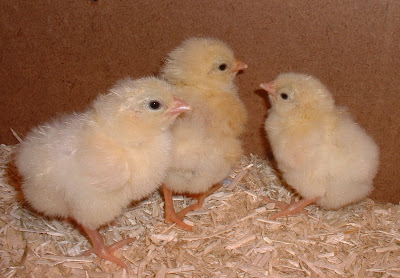 Not a good hatch so far ! All 6 of the Light Sussex eggs were fertile and went full term. Yesterday 2 hatched quickly with strong chicks.....too good to be true? well yes, the second two pipped the wrong end. I don't know why.I stopped turning on Thursday morning ( 18 days) candled them and increased the humidity, the air sac looked as it should. Then I left the incubator alone.Of the two that pipped at the wrong end, one died in shell and the other, wrongly, I helped to hatch. It is very weak and if it doesn't improve in the next couple of hours we will end it's day. I don't know why I helped - I've always said if they can't hatch by themselves leave them be.Oh well. A third hatched this morning. As the first two had been in the incubator for 24 hours I removed them and put them in the brooder. I have since added the third.
I have opened the incubator twice since the start of hatch...against all knowledge, advice and common sense, but the three strong chicks are now happy in the brooder, eating, drinking and scratching around. The incubator has been tidied and the humidity sorted. Now I will leave well alone and see if any hatch over the next couple of days.
Give me a broody hen any day.