This morning having to get up in the pouring rain at 6.00am to feed the lamb and see to the chicks and chickens was made worthwhile by finding a blue egg in the chicken house, admittedly broken on the floor.One of the Cream Legbars has finally decided to lay. It's not that she is late, she is only just 24/25 weeks old but she has had such a red comb for a while now, that if it was possible I would have thought she was laying away.Then this afternoon I found another blue egg on the ground outside the henhouse.The two Legbars always do things together, shadows of each other ! 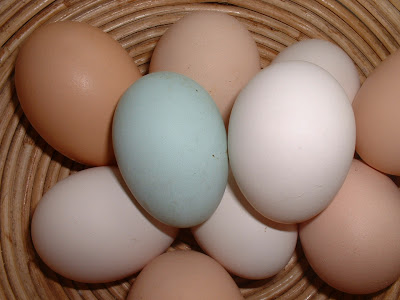 Then at lunchtime the pigs were delivered. I can't believe the kindness of some people. Simon - the person I bought the weaners from, offered to deliver them to me free of charge as he was visiting friends only a few miles away. As it turned out his plans were changed but he still drove the 2 hours from his home to deliver them as he had promised to do so ! The weaners are super pigs, lovely condition. They have settled in well so far. Although they have been raised outdoors we will keep them in for a few days.When they arrived they had a good nosey around the pen, had a drink and then settled down for a sleep.This afternoon/evening they happily/greedily ate their food, making an unbelievable mess ! We have now left them to settle for the night and will check on them first thing tomorrow, although I am sure my husband's Uncle will look in on them several times tonight : ) 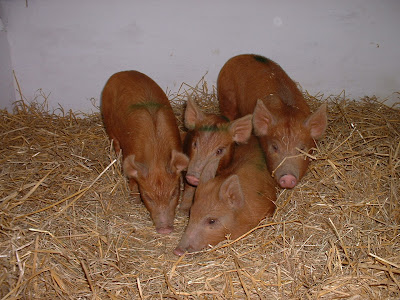 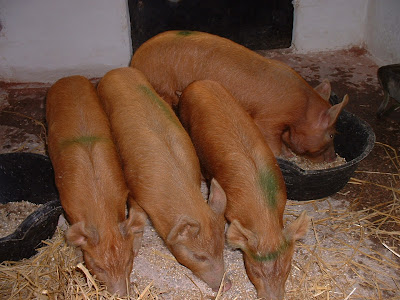 And finally for Dad .....Look Dad first picking from the veg patch tonight !! 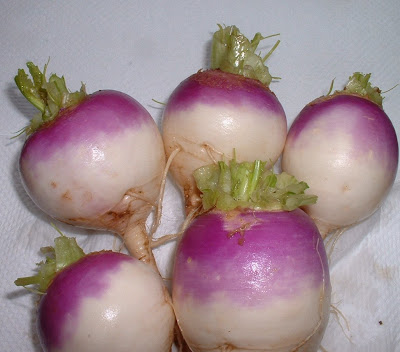 the pigs look great - and that blue egg is a really ncie bleu - our cream legbar hasn't laid an egg for more than a month and were not as blue either... i feel like getting some CLB hatching eggs... and she might be pot shaped..