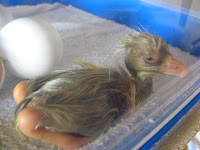 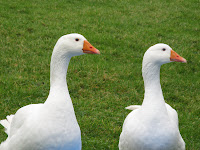 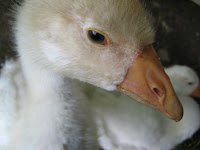 It's time I made a decision on my geese! Some have to go. At present I have seven, the two original pairs and three goslings from a May/June 2008 hatch.They are kept in two groups, the older pair with their female gosling in the orchard and the younger pair with the two unrelated male goslings in the paddock.

I only really want to keep one pair, so that I can move them around to rest each area and also to give me more flexibility with the other livestock.I do want to keep one pair as they are very good at ' tidying up' after the sheep, their eggs are gorgeous and they are fun to have around, all with very different characters....so who do I keep?
The older pair, I like and they are my husband's favourite.Henry the old gander is at least 25 years old or so we are told, he stands tall and stately and for most of the year friendly, just a little protective in the breeding season.He is a big white Embden/Toulouse type, his partner is a smaller grey and white pretty little thing about 6 years old.She lays really well and last year went broody twice.She has been a lovely mum, very gentle and caring.Her male gosling took after his father tall and grand, the female like her mother but with a little bit more of her father's spirit.
The second pair I love, they are so gentle and quiet.The gander makes me laugh, he's so full of bravado, during the breeding season, he'll coming running towards you head down, stops several yards from you and then turns back towards his partner declaring he has seen you off.We have nicknamed him after an acquaintance of ours Bernard the bulls****er.
The goose is so gentle, she has a damaged wing, that doesn't lay flat.She got the injury not long after we had her.We had it x-rayed but there was no break and it doesn't seem to affect her at all.She is such a good reliable layer, an egg every other day for the whole of the season.They are both about six years old and are smaller and stockier than the other pair.
The two male goslings were meant for eating but with so much else going on in our lives in December we just didn't get around to doing them.Apparently they are fine up to the age of 10 months for eating without being tough, so I could sell them for that purpose or I could pair the unrelated male with the female gosling and sell them together.I wouldn't mind if either of the older pair went FTGH it's just deciding who.But I really do need to make the decision soon.