The sun is shining

At last the sun is out, the wind has dropped and it has started to feel like summer is on it's way again. All the animals seem so much happier....apart from Mona! This morning I finally made the decision to move the young chicks from the garage to the hen run. As you can imagine Mona is making her feelings known to the whole neighbourhood, she is not happy with the situation at all. I'm not sure the chicks were to begin with either. First of all I tried the gentle approach, placing them all into the house part of the run so they could venture out when they felt ready, they would also then know where 'home' was. Well after 3 1/2 hours of waiting I decided a more direct approach was called for and shoved them all outside. After a short time of standing around not quite sure what was expected of them they started to explore. The ground was uneven and moved as they stood on it, the wind blew and ruffled their feathers and crows flew overhead calling....not to mention Mona. All was very strange and different, but they have found their food and water, tasted the grass and jumped to catch flies and been in and out of the house, so I guess they will be fine. Now if only Mona would be quiet and accept the situation! 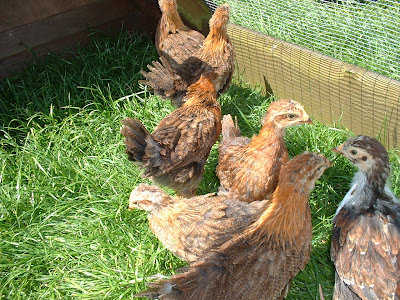 Today is day 18 for the eggs in the incubator, so I have stopped the turner and have filled the tray with water now it's just a case of waiting and hoping for a successful hatch.

they are looking good :)

:) Thanks, they always look so much better once outside in the fresh air.So much easier to look after too.