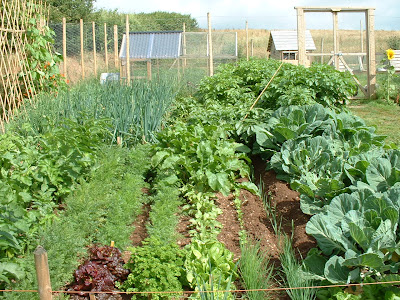 The veg patch looks fresher after yesterdays rain. Most things are growing well. The first earlies were disappointing, a new variety this year 'Swift'. They were suppose to be ready extra early, but didn't appear to be. The crop was disappointing 4 plants for one meal ! and not that tasty. I don't think we will bother with them next year. The second earlies 'Charlotte' are now ready for digging...they should be good, a waxy and hopefully tasty potato.

We lost a couple of young sprout plants to root fly but the remainder are coming along fine.The turnips have been a huge success, lasting without going hollow. We will certainly grow the same kind again. The first sowing of runners look fine and the second are coming through. The french beans.... well there has been an on going battle between man and mole with those! Each night the mole uproots them and each morning they get replanted. This has been going on for several weeks now but I think the mole has finally backed down. He is now burrowing his way along the edge of my outdoor tomatoes! The french beans have survived and are flowering, just not as good as they would have been if left in peace.
The broad beans suddenly got blackfly. They appeared overnight but a couple of sprays with soapy water seems to have done the trick.
We have finally succumbed to temptation with the rhubarb. It is best not to pick it in its first year, but it seems such a waste ! It was lovely.

All the greenhouse plants are doing well. A couple of tomatoes have an unidentified problem....see photos below. One looks as if though it's split, but I have been careful with the watering and it is only one tomato. The second - I don't know, again just the one fruit. 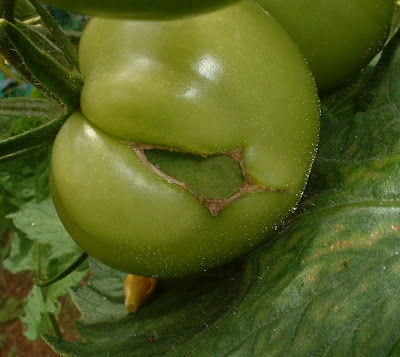 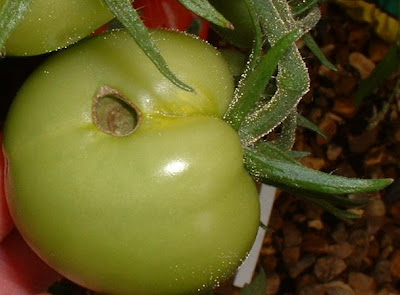 The peppers have so many fruit on each plant, I am wondering if I should remove some. It goes against the grain but I do think in this case it will be for the best.

The melons have really got going now so I must look to see how to tie them in.

Hopefully with a little more rain and not too much slug damage the garden will continue to do OK.

Twice as much would be nice.

It sounds as if though the peas are really good this year ...do like the sound of the purple ones.

Still a disgusting lack of weeds ;-) Mind you Pig gets the big ones I have grown so he's happy.

LOL that's because we have about a tenth or even less than you.