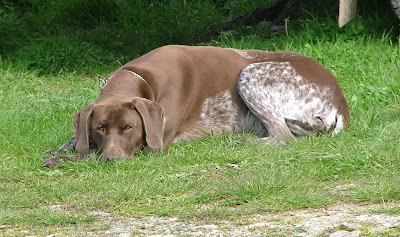 He looks as if though butter wouldn't melt....and I should be impressed by his antics but sometimes... !!!
Today he managed to steal a box of eggs from the kitchen work top and carry them to his bed in the other room, without breaking a single one !! He then ate them all.
He regularly helps himself to a pear from the fruit bowl. The bowl is in the hall and he has to stand on his hind legs to reach, he never knocks the bowl down or takes more than one pear. He just very carefully chooses one and then retreats to his bed to eat it. We don't approve and certainly don't encourage it, but it does amuse me to think that he just lies there and thinks to himself 'uuum think I fancy a pear' and just goes and helps himself.
He also can open doors, most annoying. The press down handles are easy, he just jumps up and uses his paws to open them, but most of the rooms have turned door knobs.These he just carefully puts his mouth round and gently turns until they open.So keeping him confined isn't easy.
He is good with the animals though.OK to be honest he's frightened of most of them, not quite sure if to trust the cats, they pretend to be friendly then scratch and hiss, the geese are terrifying and the sheep - well sheep are boring - they don't do anything just stare with contempt.
It's a hard life being a dog.
Posted by Sandra at 14:16

LOL. I wish our thieving mutt was a bit more selective - the odd pear and even half a dozen eggs (we have a massive egg mountain at the moment) would be acceptable but she steals anything and everything she can, the moment our backs are turned. Her latest antics were the second helping of cannelloni sitting in a bowl on the cooker. She did manage to not break the bowl but got all the cannelloni on the floor. Pity for her she hadn't accounted for the fact that such a meal makes a large plop when it hits the deck and we were in the next room. Bad, bad dog!